Interesting article on the great job being done at the Bhopal Shooting Academy, full marks to the Madhya Pradesh government as well as Mansher Singh.

The day is clearly etched in Manisha Keer's memory. She had reached the Shooting Academy in Bhopal for trials for admission riding pillion with her father on his bicycle on a hot July afternoon in 2013. All of 14 then, Manisha had till then never held a gun in her hand and had no idea about a sport she wanted to take up, one that in India has been dominated by those born with the proverbial silver spoon in their mouths. Today, Manisha, the daughter of a fisherman who makes a living selling his daily catch from the Upper Lake in Bhopal, is ranked first among trap shooters in India-a feat she accomplished during the trials for the India team at Patiala in December 2016.

The seventh of Shakuntala and Kailash Keer's five daughters and three sons, Manisha is just back from the Shooting World Cup in Delhi recently-her first big-ticket international event. She didn't do as well as she had expected to, but she has already begun training for the next round of trials for the upcoming junior world cup in the national capital.

Kailash Keer has a bit of Mahaveer Phogat-the character Aamir Khan essayed in blockbuster Dangal-in him. As a youngster, Keer, who hails from the traditional Keer fisherman community-had been keen on sports himself. But the lack of opportunities and awareness ensured that he did well only in donga (traditional fishing boat) races organised by the state fisheries department. Like Phogat, who was driven by the desire to have his daughters attain the sporting excellence he could not, Keer too has five of his eight children engaged in sports. While son Gautam and daughters Poonam and Baby have enlisted for volleyball at the Sports Authority of India's sports centre, another daughter, Sona, is into water sports and won a gold and silver at the recent rowing nationals in Bhopal. "Mehnat aur naseeb bahut badi cheez hain (hard work and luck are big factors)," says Keer, sitting outside his modest home in Gaura village on Bhopal's outskirts. Ask him if he worries about his kids not doing well either in sports or in academics, eventually having neither a job nor a sport to rely on, and he says: "Three of my children took up volleyball, and the facility where they practised shut down. But the fear of failing will not stop me from asking my daughters to focus on sports," he says.

"Manisha's capacity to absorb what is taught and to use it in a match is amazing," says Commonwealth trap shooting gold medallist and Olympian Mansher Singh, who is the chief coach at the MP Shooting Academy. "Her rise in a short span of time has made everyone take note. I wouldn't go as far as to say that she has attained greatness in the sport, but she is definitely on the way."

What made her choose shooting as a sport? "I had absolutely no idea about shooting before I joined the academy," says Manisha. "But now I eat, breathe, sleep shooting." She has just finished her class X boards. "I am only thinking about the trials for the Junior World Cup right now," she says, when asked if she has decided on what stream she will choose in Plus Two, a decision most kids her age fret about.

For Manisha, it has not only been a fight to stay on top of her game but equally to train mentally to take on the competition. Pomp and pageantry are more an integral part of shotgun shooting competitions (trap, skeet and double trap) as compared to competitions of other shooting disciplines like pistol and rifle. This perhaps has something to do with the fact that most athletes at shotgun competitions come from affluent backgrounds, and swagger comes naturally to them. At the nationals in Jaipur, where the most expensive SUVs were parked, Manisha sat in the bus the MP Shooting Academy had provided its athletes, and plotted her fight with her opponents, both on and off the field. "A certain swagger and aggression are a must in shotgun shooting," says Mansher Singh. "The biggest challenge I face as a coach is to address this gap because of the vast difference in backgrounds of many of the kids at the academy and the competition they face. One way to address it is by providing the best equipment, best training infrastructure and exposure to athletes, comparable to what the competition has, which is what is being attempted in MP."

Sure enough, it was match pressure that let Manisha down at the World Cup in Delhi. She was shooting exceptionally well during the practice sessions before the World Cup, but when it came to D Day, the podium finish eluded her by a huge margin. "I don't know what happened. The world cup was my first international tournament. I felt pressured and I didn't do as well as I expected. I have been training to handle the pressure," she said. Mansher will have to work harder on that aspect.

Set up in 2007 by the state government, the MP Shooting Academy is among the several centres set up to promote sporting disciplines such as equestrian sports, water sports, martial arts, badminton, hockey, cricket and boxing. The academy provides perhaps the best facilities in terms of shooting equipment, boarding and lodging to its athletes of any state government-run entity in the country. "Sporting success depends on getting the best coaching and state-of-the-art equipment for talented sportspersons selected through a transparent system based on merit," says Upendra Jain, IPS, ADG and director, sports, MP, on the advantage of the academy-based approach in identifying sporting talent. "The academies under the state government have all of this, which is why MP's now become a sporting state."

Many, however, point out that while the performance of the academy's shooters is spectacular at the junior level, it dips at the senior level. The competition seems to devour them there. "The transformation from junior to senior should take place within 3-4 years but we realise there has been a problem with that," says Mansher Singh. "However, one must realise that we need more infrastructure and while we have been around since 2007, the results are just beginning to come in."

Manisha's achievement-though the most inspiring-is not the only success story at the academy. There is Pooja Vishwakarma who is in the junior India squad and is the daughter of a mason. Gubbu Shankar, Sandhya Yadav and Aman Dayal, all medal holders in team events at the nationals, all first-generation shooters and members of the junior India squad in double trap, skeet and trap respectively, spent their early years in a charity home before moving to the hostel in the academy. 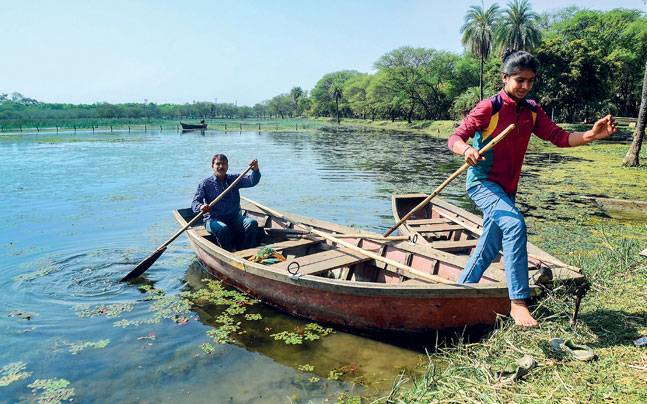 After a gruelling day at the shooting range, where her wiry frame takes the recoil of 125 shotgun rounds, followed by a session at the gym, Manisha drops by at home to say bye to her family before leaving for trials in Delhi. During their conversation, Keer asks his elder daughter Sona to keep an eye on government jobs for sportspersons. "It can wait," says Manisha, asking her sister to focus on her game instead.

pistolero
One of Us (Nirvana)

Medals will follow..
"Whatever is begun in anger ends in shame."
Top

Inspiring story...respect for the girl's grit and determination.
"One can never know how far he can go and reach, until he starts running "
Top
Post Reply
3 posts • Page 1 of 1