Discussions on the Right to Keep and Bear Arms.
Post Reply
91 posts

veeveeaar
One of Us (Nirvana)

This is my response to the issue by mail to the Mi nistry of Home affairs, Government of india.


Sir, with all due respects and abiding by the laws, I hereby submit my sincere views as a Arms Licensee for the past 35 years and as a sports shooter for the past 26 years.

I)It is indeed very sad to note that this proposed reduction in the number of firearms , a person can acquire ,have in his possession or carry at any time ,from the existing limit of THREE FIREARMS to ONE FIREARM.

2)This amendment is totally un warranted ,and blind as it does not have any basis of scientific research data, based on crime records or valid reason connecting any law and order situation or criminal acts directly or indirectly connecting or attributing any adverse criminal acts by such multiple arms licensees because of this provision of the existing three firearm limit for the Indian citizen.

3)This three firearm provision has been already provided ,keeping in mind the ground reality and practicality of use of these three types of firearms that are basically and expressly needed for use for different types of situations for which the user /licensee is the best judge.

SHOTGUN ( MUZZLE LOADING ,DBBL, SBBL, PUMP ACTION ) which is the most affordable for anyone and all round protection and versatile type firearm. It is always a property specific firearm or stationary that is normally held in the home, farm or any other property as a deterrent and offers overall security against criminals and animals alike. It also has its limitations such as size and not easy to conceal and carry in any mode of transport like motorcycle, car, train or aircraft discretely. It can be mistaken as a sign of aggression if carried around in public by others and police. the law also does not allow us to take it unsheathed. Any Shotgun owner can use his shotgun to practice TRAP SHOOTING or SKEET SHOOTING as a pastime and for this he needs TWO TYPES OF SHOTGUNS.

HAND GUN ( pistol / revolver) This is the most expensive type of firearm that many firearm licensee’s want to posses but not able to buy because of the enormous cost . It is the best close quarter protection weapon for anyone( ladies, businessmen, old persons living alone ) in all situations. It can be carried discreetly and offers a great sense of protection and is not intimidating and can be carried easily in all modes of transport and luggages . This is also used as a pastime sport for TARGET SHOOTING to practice their shooting skills in an emergency situation.

c)RIFLE (NPB) This is normally possessed by persons specifically for either long distance protection like in a large area of property or remote area ( farms ,estates) to ward off CRIMINALS or ANIMALS at a safe distance or for Target shooting and both.

4) With regard to Shooting sports there are different types of disciplines :-

5) For basic beginner Sport shooters they have to start with four kinds of weapons. These have to be sourced from the INDIAN ORDNANANCE FACTORIES or NRAI which are substandard and it is a nightmare experience with no after sales and service or spares. Even the Indian military has rejected its products.

6)The advanced Aspiring shooter level sports persons need imported weapons conforming to ISSF rules which is unaffordable by many shooters so they improvise with the IOF guns .

7) As legal hunting has been banned, most licensees have become part time sport shooters and visit local or SDA or SAI ranges for recreational shooting,using their additional firearms of choice, adding to the sport shooters team and thereby keep INDIA in a leading and commanding position in shooting sports globally.

These part time sports shooters use their licensed weapons for both Sport and Self protection with their multiple weapons.

10) All law abiding citizens who posses three weapons for SELF PROTECTION do so ONLY IF THEIR SITUATION WARRANTS for a specific purpose and if they feel it is very necessary for their safety , or it has been inherited and being held as a heritage of their ancestral property and traditions.


11) Given today’s cost of acquiring the three firearms, ammunition the CORRUPTION, RED TAPE and WILFULL DELAY in getting the licences and endorsments from THE VERY LEARNED LICENCING AUTHORITIES , the COSTS and TIME , no one will acquire a second or third weapon, in the first place unless very necessary.

12) In my humble opinion the Government should give express and immediate importance to :--

a)Complete elimination of illicit weapons which are easily available to criminals on a war footing and the most stringent punishment for illegal arms possession and manufacture.

b)Encouraging the domestic arms and ammunition industry and employment of gunsmiths and people with gun making skills.

a) As the police and all ranks of the licensing authorities play a very bad and negative role in the process of arms licensing .It is a fertile ground for Corruption, nepotism, hypocrisy and use this to settle scores with political factions and favouritism. So even law abiding citizens opt for illicit weapons when their genuine applications are delayed and denied a They do this as a last resort in desperation and out of their own security reasons.

b) Re-Write the ARMS ACT and RULES in simple language without ambiguity for the benefit of the citizens and educate the very learned Licensing authorities and their ranks about the arms act and rules as done for election staff by online classes .
. c) create a online system where the applicant for new license or renewal is screened by all the security agencies of the country like passport verification, simultaneously within the stipulated time and the application is decided within the legal time frame and the concerned licensing authority is personally responsible for any delay or deficiency of service.

14)Extend the area validity to ALL INDIA for all licenses and make it compulsory to register in all district ,state borders, crossing points , railway stations and airports or when the licensee carries his weapon in transit this helps in tracking both the licensee and the weapon and prevent gun crimes.

15)End the system of deposit of firearms during elections as many licensees in rural areas feel vulnerable and go for illicit weapons or crude bombs for protection from opposite parties or criminals or animals. Order shoot at sight for any fire arm violators during elections.

16)The govt has made a gross blunder in providing NPB arms to other government departments like the FOREST DEPARMENT where the corrupt ranks use civilian ammunition 12 bore and 315 to poach the protected animals . This has not been given thought and rectified. A lot of .303 rifles that are serviceable and lying idle with the govt can be replaced for the 12 bore shotguns and 315 rifles so that insider crimes can become traceable.

This is my humble comments and suggestion as a law abiding citizen of INDIA. I pray that these points will be scrutinised and made use of for the safety and security of india.

One of my friend's son is working in TV network. I spoke to my friend regarding this arms act amendment curtailing the 3 weapon limit for common citizen. His son Mr Uday Singh Rana, journalist has agreed to raise this matter on his show. He is willing to speak to IFG leaders/ representatives.
Kindly let me know which one of us would like to speak/ appraise Uday Singh Rana of the present situation.
My mobile number is 7838616866.
Kindly speak to me so that I may fix an appointment/ phone discussion with Mr Uday Singh Rana.

My Views and Comments sent to MHA by email.If you have not done already please do so before 18 Nov.2019
Arms Act, 1959 Amendment sSuggestions &amp; Comments (Final)-converted.pdf
Regards,
Anand
You do not have the required permissions to view the files attached to this post.
Top

veeveeaar
One of Us (Nirvana) 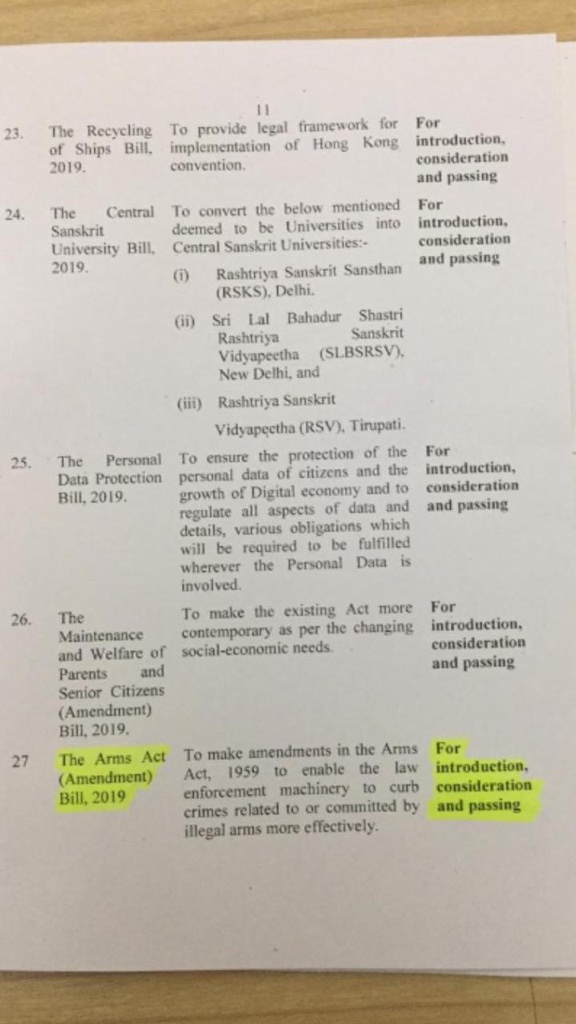 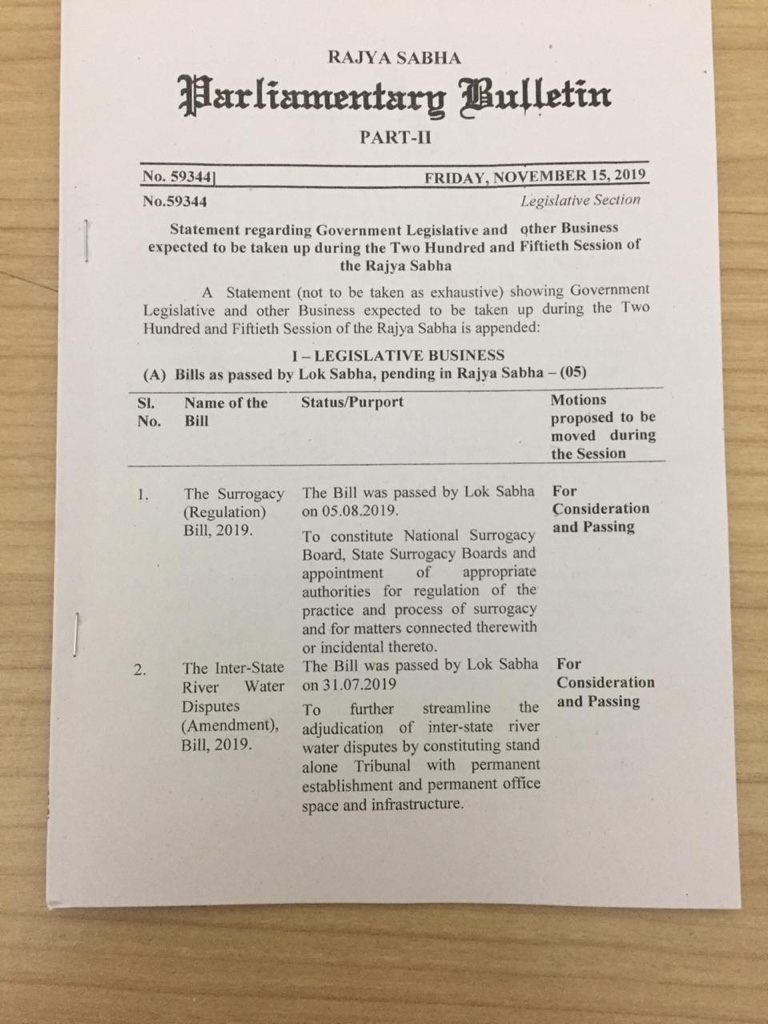 Just saw this and its really depressing. Just hope the 26 Bills takes considerable time and in the mean while good sense prevails our Parliamentarians.
Regards

when is this to be implemented??what is the sarkar expecing..all gun owners to deposit "extra" wepaons to the nearest District magistrate etc ???
Top

Many media reports are saying that govt has proposed to reduce number of weapons to be held on arms licence to two weapons but the bill of amendment introduced in Lok Sabha is with proposal of one weapon. 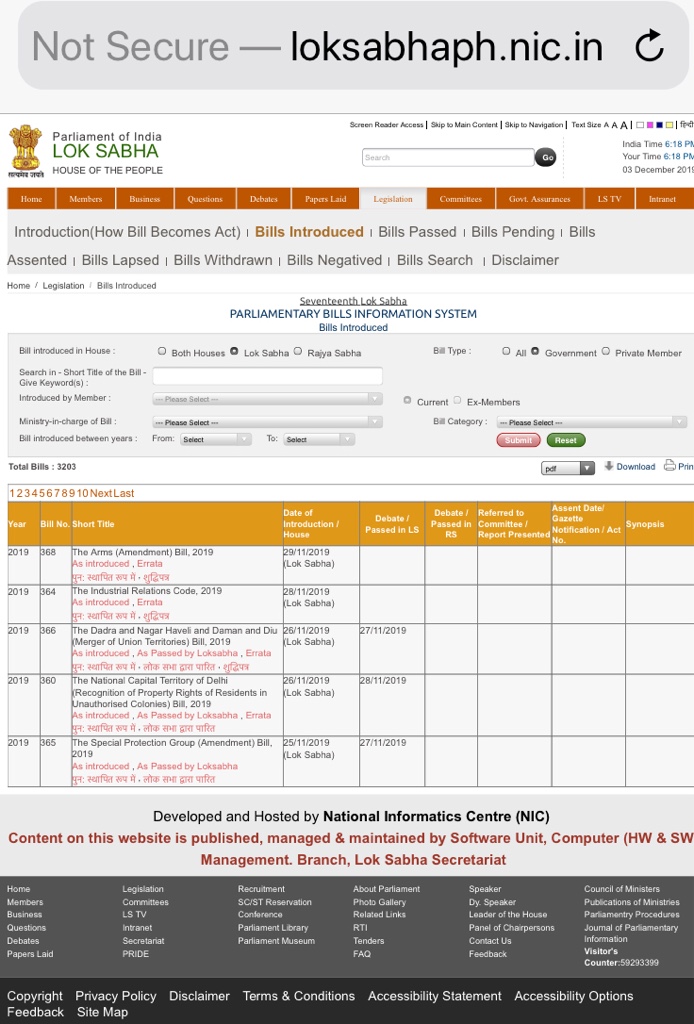 Some confusion regarding what's going on on this front. Some news pieces say the bill has been passed. The following articles says it's still to be debated - https://www.cnbctv18.com/politics/parli ... 827071.htm and this one says the move has been deferred following a strong opposition - https://www.indiatoday.in/magazine/nati ... 2019-12-06
Top

The Arms Act(Amendment) Bill,2019 was "introduced" in Lok Sabha, and "moved futher for condideration" today. However no debate or deliberation took place since the proceedings were disrupted due to some other incident. The House adjourned until 11 am on 09-12-19.

What this means is that there are several steps before it can be made into Law. After this matter is debated, it can be "passed" or it can be sent to the Parliamentary Standing Committee for Home Affairs for review suggestions, comments etc, and then after it is received back, it can then be "passed"(with or without suggested changes modifications etc).

After that, it will then go to Rajya sabha and then deliberated and passed. If the Lok Sabha does not send it to the committee, the Rajya Sabha can send it to the committee for review. Once the committee sends it back, and it is passed by Rajya Sabha, it will be sent to the President who will sign it into law.
AFAIK the comments suggestions and advice of the Parliamentary Standing Committee for Home Affairs is not binding and may be overlooked (there in lies the danger), but it will usually be taken into consideration.

The India Today article posted by you contains the most up to date data and is the most accurate info. Stay alert and dont take any "news" for granted.

Thank you for the video, Anand. At least/last a programme wherein the anchor and the participants are not trying to drown the others' voices with their shouting. One good thing is that they all seem to agree that licensed owners contribute almost nothing to crime.
It ain’t over ’til it’s over! "Rocky,Rocky,Rocky....."
Top

Finally, an encouraging sensible video, but overall things look hopeless. This Government will destroy the federal character of India. Sorry, but not sorry, if I have offended some people... Now, is the time to take a stand.