by Heyad
I had to use some steel wool last night to remove some surface rust on the outside of my SR9 barrel. I forgot to wipe it down after I handled it... So now the barrel has a bunch of scratches on it. but I'm not to worried it happens.

It got me thinking about a smith I saw using some sort of metal 'thing' to remove surface rust and that brownish hue from a blued shotgun. I looked like one of those curly things you put on top of a present all the curls were different sizes and it didn't seem to harm the bluing at all. He said it was also coated in some sort of chemical. I asked him where I could get one and he said 'trade secret.'

Does this sound familiar to anyone? I am going to buy some brass brushes in case something like this happens again. I figured I would get one of these if I could find it.

Re: Unknown tool used to remove rust on blued guns 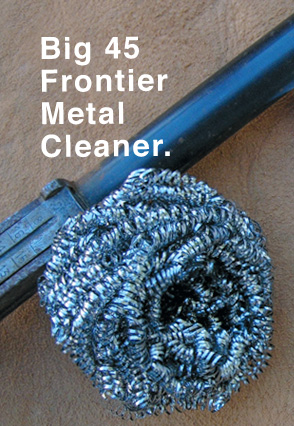 The alloy is softer than bluing but harder than rust, so generally it will not harm the bluing.
Be Careful; stainless scouring pads like this are also available on the market but those will damage bluing.

Re: Unknown tool used to remove rust on blued guns

by Vineet
I have heard that pencil lead works wonder on removing rust patch without scratching.
All times are UTC+05:30
Page 1 of 1
Powered by phpBB® Forum Software © phpBB Limited
https://www.phpbb.com/