In Gurgaon I have never found sealed ammo boxes. I was wondering if it is supposed to be in sealed boxes or open boxes are normal?? Recently I bought a sealed box of 500 rounds of 'SK Magazine' .22 rounds.I found them to be oiled well but handling them by loading and unloading the rounds a couple of times, the oil comes off.
I would like to know if the other rounds 30.06 are not oiled as the oil has cleaned up due to handling or is it not supposed to be oiled at all?? If the rounds are not used for some time is it better to oil and store them??
If yes, what oil would one suggest for oiling the ammo??

Ammo is not supposed to be oiled, generally speaking. I would remove the oil before firing. It could interfere with proper obituration of the case walls in the chamber during firing and probably some fouling issues. I think it is possible to be dangerous but not usually. Not something I know much about.
Top

First of all, congratulation on your purchase of SK .22LR ammo. It is good stuff.
Secondly, DO NOT oil your ammo.

If the oil gets into the cartridge, it will deactivate the primer and can render the powder unable to ignite. You also do not want oil in the bore of a rifle that fires a high power cartridge (read high velocity here).

What you are looking at on the SK cartridges is bullet lubricant and is often used by Lapua on their .22 LR cartridges only.
Leave it on the bullets, it won't hurt anything. In fact, it will assure consistency and prevent leading. It sometimes takes five to ten shots to get the bore coated properly before you will start to see the consistent shooting. If you wipe it off, you will lose that consistency. So don't handle those .22 LR cartridges till you are ready to shoot them. Lapua .22 LR ammunition can be extremely consistent and accurate, minimizing fliers that are so common with .22 LR ammo. My personal experience with Lapua .22LR ammo is that is is extremely consistent and can produce phenomenal groups even at 100 yards. I don't touch the cartridges till I load a magazine. I also carry a rag to wipe my fingers off what I am done loading the magazine.
“Never give in, never give in, never; never; never; never – in nothing, great or small, large or petty – never give in except to convictions of honor and good sense” — Winston Churchill, Oct 29, 1941
Top

Thanks Commonwealth_of_PA and XL, for your feedback. What are 'Fliers' in .22 LR that you have mentioned??

aadhaulya wrote:Thanks Commonwealth_of_PA and XL, for your feedback. What are 'Fliers' in .22 LR that you have mentioned??

This is a flyer: 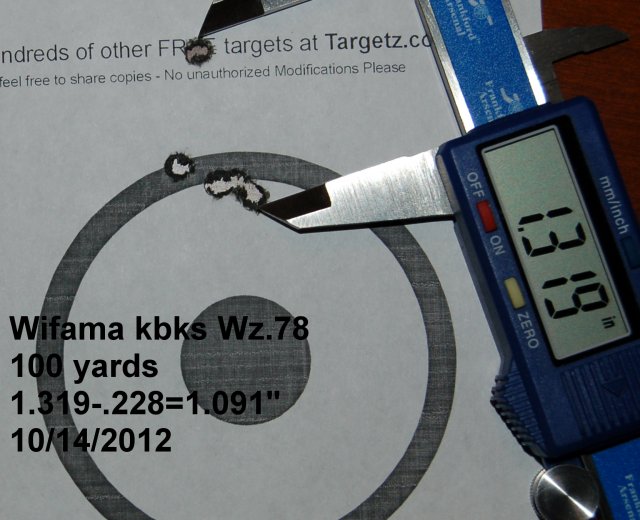 The lone bullet hole at the top, separate from the cluster is generally called a flyer.
The rifle above shoots very consistently and with a 25 inch barrel, maximizes the powder burn and the accuracy of the .22 LR cartridge.
Even with pretty good ammo (the Wolf Match Target used here is made by Lapua), you will occasionally get flyers.

Granted, it could have been me but even at 25 yards you will see flyers with .22LR. Many times it is attributed to the ammunition.
You can get a nice little group going and then you will see a outlier or flyer. There are a lot of things that can be the cause but usually it is the ammunition. Sometime it is the rifle and you will get a cold bore flyer (the first shot out of the cold bore).

There is a so little powder in a .22 LR cartridge that even a very small amount of overcharge or undercharge can make itself felt, especially at longer distances. .22LR ammo can also suffer from improper (inadequate) application of the priming compound in the rim which can cause spotty ignition of the powder.

Generally, centerfire ammunition is more consistent and if I saw the above group shot with a centerfire cartridge, I would attribute it to the shooter but any halfway decent shooter can be consistent with most centerfire cartridges and most rifles. By that I mean that you generally won't get four touching and then one off all by itself.
With .22LR, sometimes no matter what you do , you will get flyers.
“Never give in, never give in, never; never; never; never – in nothing, great or small, large or petty – never give in except to convictions of honor and good sense” — Winston Churchill, Oct 29, 1941
Top

With 22 ammo, the pressure is so low that having the cases oiled makes no difference and can actually improve function with semi automatic guns. However, centerfire cartridges are not to be oiled or lubricated. Funny as it sounds, the cases upon firing expand slightly and actually grip the chamber wall of the barrel. This absorbs a bit of the pressure which otherwise would be pushing the case backwards against the breech. Theoretically it is bad for the gun to fire oiled cartridges though I can say that I have never seen a gun damaged this way ever.

For storage, one of the best and easiest ways is to put the cartridges in "ziplock" plastic bags. It keeps them bright and shiny for years and years. You can either put them in bags loose or just slip the box of ammunition into a bag and leave it at that.
"What if he had no knife? In that case he would not be a good bushman so there is no need to consider the possibility." H.A. Lindsay, 1947
Top
Post Reply
6 posts • Page 1 of 1